Brasfield & Gorrie was hired by ThyssenKrupp Elevator Company to construct a new elevator test tower in Atlanta, GA. At 400 ft / 121m it is the tallest such tower in the Western Hemisphere. To speed completion, the team chose the slipform method of construction. With outside tower dimensions of 74 ft x 56 ft, it took about eight weeks of continuous slipforming to complete the tower. This saved close to three months of construction time compared to other construction methods. Brasfield & Gorrie hired Gleitbau GmbH for the slipform works, the leading slipform company in the world today.

The slipform design had to accommodate nearly 190 openings and more than 3,300 embedded plates for interior and exterior structural steel framing. A continuous concrete supply of at least 5.5 cy per hour was needed to keep the slipforming on track. The concrete was bucketed to the work point by tower crane, which was also used for delivering the rebar, embeds and other supplies. The 4 ft tall slipform was hydraulically lifted by about an inch every 15 minutes. Soon, the tower began to rise at a rate of about 7.5 ft per day, with an average of 30 workers on the platform at any one time. The process was completed in 54 days with no recordable safety incidents. For a detailed ENR Report on this elevator test tower, please click here.

Gleitbau GmbH is a leading slipform contractor in North America and around the world, executing more than 100 slipform projects per year. The company was founded in 1961 and became an industry leader during the 1970s and 1980s through its offshore work in the North Sea. Gleitbau GBG typically supplies the slipform system, engineering, concrete mix design, geometry control and technical supervision, mostly to general contractors. Heavy lifting services are also provided, many times in conjunction with slipforming. For more information, please contact Michael Veegh 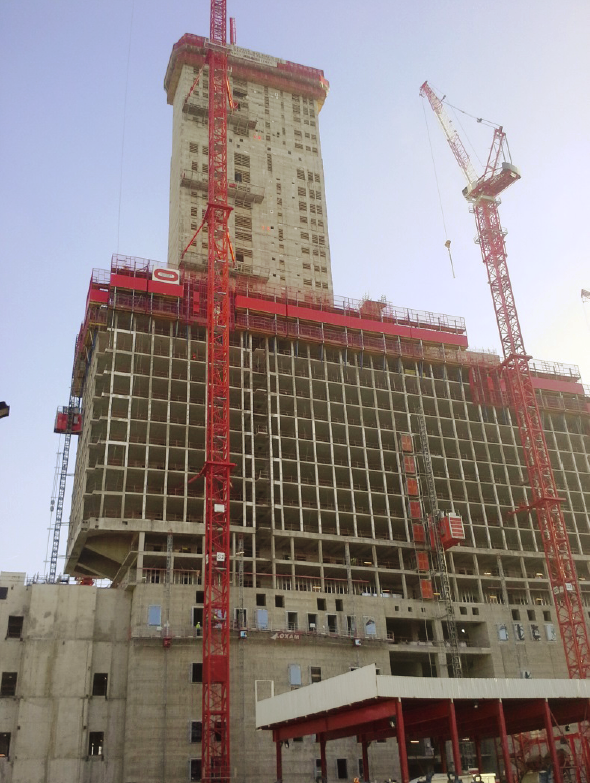 High rise construction can greatly benefit from the use of vertical slipforming. Shown above is the new Palais De Justice currently being built in Paris, France. Most tall buildings have one or more concrete cores that provide lateral strength to the building. They also house the stairs and elevators. These cores can be rapidly built by using the slipform method of construction. Doorways and openings are easily added by inserting block-outs into the slipform as it rises. The above high rise core was slipformed by working day shifts only. However, slipforming is most efficient when working around the clock, 24 hours per day, using two or three shifts. Typical speeds are 3m to 5m per day, but up to 10m per day can be achieved if workers are well coordinated and not limited by material supply or concrete quality.

Slipforming is extremely safe, as the slipform setup always remains connected to the structure. The two work platforms provide a safe and predicable environment for the workers. The lower platform is used for finishing the concrete to the desired surface quality. Tarpaulins can also be suspended from the lower platform. These shield the fresh concrete from direct exposure to the sun and wind during the initial curing period.

Gleitbau GmbH was hired by Bouygues Travaux Publics of France to provide the slipform equipment and onsite supervision for this project, including geometry control. Gleitbau GmbH is a world leader in concrete slipform construction and works on projects all over the world, including North America. You can contact Michael Veegh for more information on slipform construction. Gleitbau will gladly provide a technical review and slipform pricing for your upcoming high rise project. 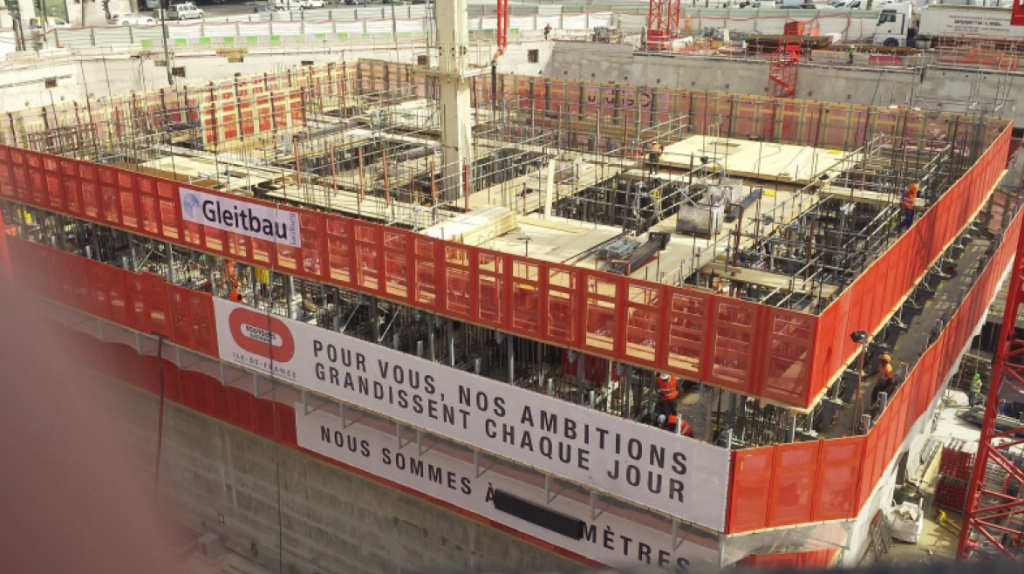